Starting with r151022, the new illumos boot loader, ported from FreeBSD, is the default boot loader. Existing installations that use pkg update will continue to use GRUB for at least one reboot, though.

A new OmniOS installation of r151022 or later will install with Loader as the boot loader. It is possible to revert to GRUB in r151022, but GRUB is likely to be removed in a post-r151022 Stable release, and should be considered deprecated for new installations.

I WANT TO MOVE TO LOADER AFTER UPDATE

There is currently a bug in loader (https://www.illumos.org/issues/8303) that will result in a non-bootable system if you have any pool (*any* pool, not just your rpool) with 4K logical sector disks attached to the system. Disks with 4K physical sectors and 512b logical sectors are ok, but disks which have 4K logical sectors will fail. Follow the directions listed below to leave your system configured with grub until this bug is fixed upstream and backported to r151022. You can check your disks with the following command:

This is the default after updating, but Loader does not get installed until you beadm activate a loader-friendly BE (including the current one). Reboots after an update without the invocation of beadm activate or installboot will mean your machine stays with grub. You should notice an extra message about /rpool/boot/menu.lst being created if loader is installed for the very first time on a root pool.

An old BE CAN be booted from the new Loader menu, but beadm will not work properly in that pre-Loader boot environment once booted.

I WANT TO STAY WITH GRUB AFTER UPDATE

Put BE_HAS_GRUB=true into /etc/default/be on your current r151022 boot environment. This will instruct beadm(1M) and libbe that you wish to continue with GRUB. Pre-r151022 BEs will work fine, and you can beadm activate between all of them.

OH NO, I WANT TO CHANGE MY MIND

Sometimes people make a mistake when selecting which loader to use. For the lifetime of r151022, such a mistake can be rectified, so long as one of the other boot environments is not a post-r151022 with GRUB removed.

I WAS USING GRUB, BUT WANT TO SWITCH TO LOADER

If the beadm activate fails, or you still are booting with GRUB afterwards, explicitly install loader by:

If you have mirrored roots, do the above installboot for each <rpool-drive>.

I WAS USING LOADER, BUT WANT TO REVERT TO GRUB

I still get Grub, despite all …

beware, that with this you will lose any boot manager you may have had installed previously. 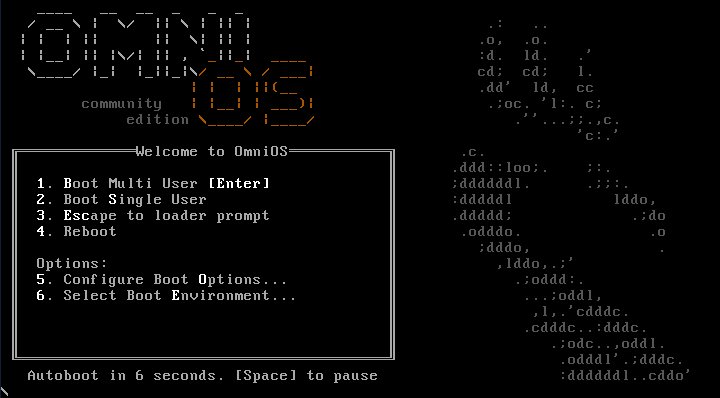 Normally a 10-second countdown will display at the bottom, and if nothing is done, OmniOS itself will boot. This screen provides all of the pre-boot functionality, including an interactive forth interpreter in the “Loader Prompt”. 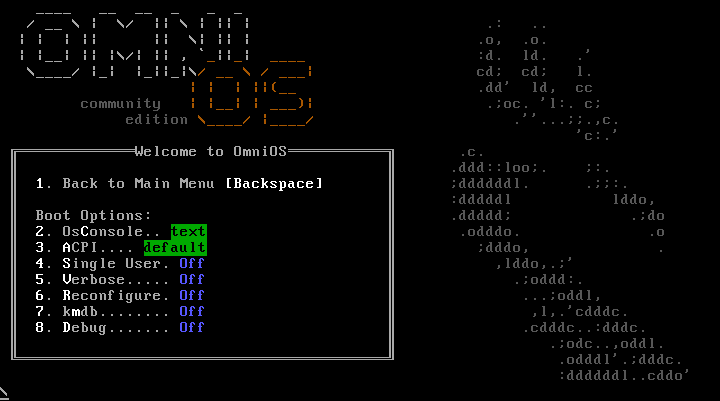 It allows the setting of debug-message boots, pre-loading of KMDB, and redirecting the console output.

Unlike GRUB, loader does not have any unusually small memory limits on number of selectable boot environments. They are displayed five at a time as follows: 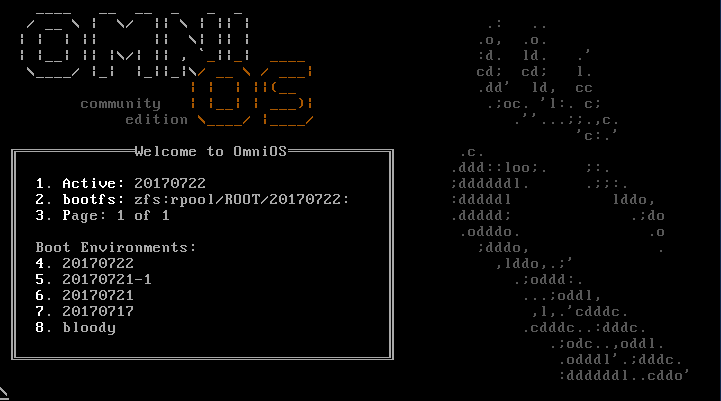 Like GRUB, a selected BE is NOT marked for persistent default. Only OmniOS’s beadm(1M) command can do that.

Subscribe to our newsletter, to keep up to date with new releases of OmniOS and major security updates!